With natural gas through The Hague

The Hague is located in the west of the Netherlands and is the only major city with a beach along the North Sea coast. The city offers numerous monuments, chic hotels and is the center of politics. The seat of government of the Netherlands is arranged around the historic Binnenhof, and the 16th-century Noordeinde Palace is the seat of government of the Royal Family. The Hague is also home to the United Nations International Court of Justice, located in the Peace Palace (Vredespaleis), and the International Criminal Court.

In times without Corona, you can sit down at one of the many sidewalk cafes on the Plein or Grote Market and enjoy the many flavors of The Hague. With two Michelin-starred restaurants, freshly caught fish from Scheveningen, the Asian influences of China Town and the former colonies, there really is everything to discover there. The North Sea Jazz Festival is a Dutch jazz festival. It has been organized in The Hague since 1976 and in Rotterdam since 2006. Now it is one of the most famous and biggest jazz festivals in the world.

The Hague has two environmental zones ("milieu zone"): The Hague City and The Hague Center. The regulations for environmental zones in The Hague are very strict and prohibit all trucks with diesel engines from entering, as trucks are one of the biggest problems in the struggle for climate-friendly traffic. The Hague's entry bans apply every day, around the clock. Other environmental zones exist in the Dutch cities of Breda, Delft, Eindhoven, Leiden, Maastricht, Rijswijk, `s-Her- togenbosch, Tilburg and affect all trucks with diesel engines. From 2020, municipalities will be able to extend the regulations to diesel-powered passenger cars, planned for example in Maastrich.

MÜLLER's long-standing customer Jansen Rioolreiniging from Sliedrecht is a specialist company that has been active in sewer cleaning in the Netherlands for over 40 years. Over the course of four decades, Jansen has developed into a team of experts in the fields of environmental friendliness, noise reduction and cost-effective transport. Having been awarded a contract by the city of The Hague, Jansen Rioolreiniging had to face the regulations of the city's environmental zone and decided to look for a sewer truck with an alternative drive concept. Finally, MÜLLER and Jansen decided to look into the subject of a natural gas drive.

The vehicle is a Vacumaster F 80 KH, which will be used exclusively in the inner city area of The Hague from January 2021. The Jansen company will use it to carry out the following cleaning work:

The relatively low-profile Vacumaster F 80 KH is a suction vehicle with an 8000 liter tank and a hydraulically driven, swiveling, lifting and telescoping pipe boom. The water ring vacuum pump on board is a CVS Vacustar WR 2500, the high-pressure pump is a Uraca P3-10 plunger pump.

The special feature of this vehicle is the Mercedes-Benz chassis. It is the new Actros NGT, which is equipped with a natural gas drive. In conjunction with the body from MÜLLER, this is the first sewerage vehicle ever built in Germany to run on natural gas.

The Mercedes-Benz Actros 1830 NGT (Natural Gas Technology) was developed to improve the quality of air and life. The 100% range is 650 km with up to 95% less CO2 emissions with biomethane.

The chassis engine has a significantly lower noise level than a conventional diesel engine and is equipped with an Allison automatic transmission, which enables smooth, continuous power transmission and requires little maintenance.

The M936 G engine is fueled with 100% CNG (Com- pressed Natural Gas). This is compressed natural gas, which is a fossil fuel obtained by compressing natural gas. It consists mainly of methane as well as other light hydrocarbons such as propane and butane. Compressed natural gas CNG can help reduce smog and the greenhouse effect.

The CNG tank on the left of the chassis in the direction of travel is made of composite material and weighs approx. 400 kg less than conventional steel tanks for CNG. Refueling the 580 l tank is just as easy as with other traditional fuels. In addition, natural gas is lighter than air and therefore volatilizes in the event of a spill.

The engine is extremely economical due to the low cost of CNG throughout Europe and government subsidies in many countries, which means that operating costs are lower than for diesel engines.

Refueling is fast and the network of CNG filling stations is the densest in Europe. In addition, CNG vehicles are often exempt from traffic restrictions, including the ban on driving in the environmental zone of the city of The Hague.

By using the MÜLLER Vacumaster F 80 KH in conjunction with the natural gas-powered Mercedes-Benz Actros NGT, the Dutch company Jansen impressively demonstrates that it is an environmentally conscious sewer cleaning company with a "green philosophy" and thus operates innovatively, efficiently and sustainably.

The MÜLLER team is proud to be part of this success story by supplying the superstructure for this first sewer cleaning vehicle with natural gas drive supplied from Germany. 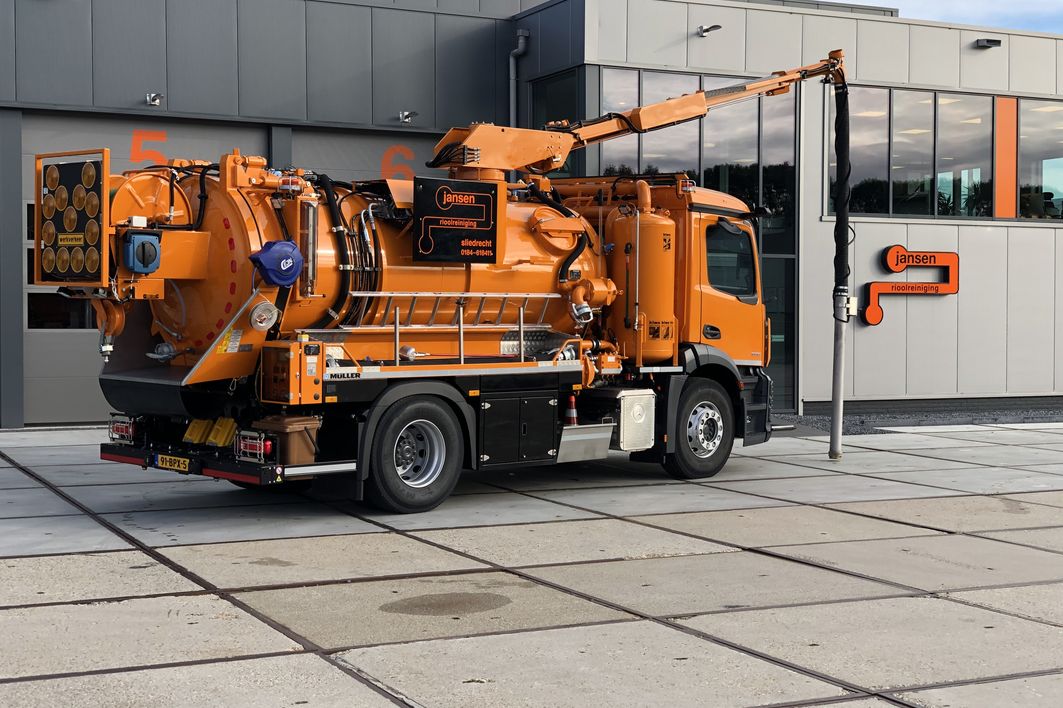 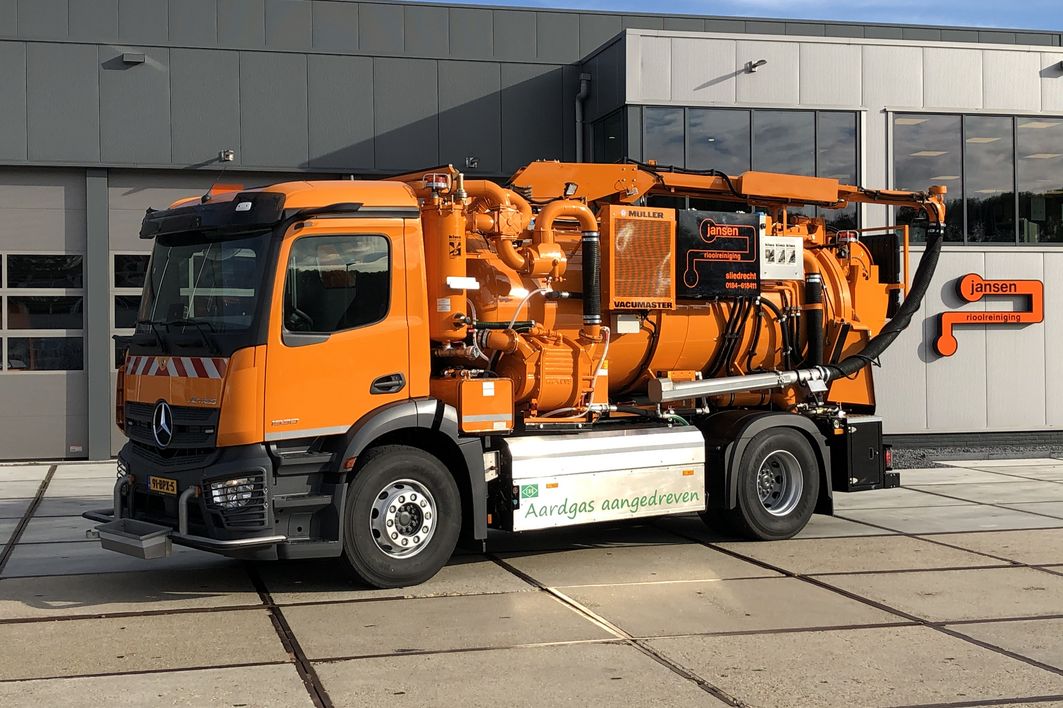 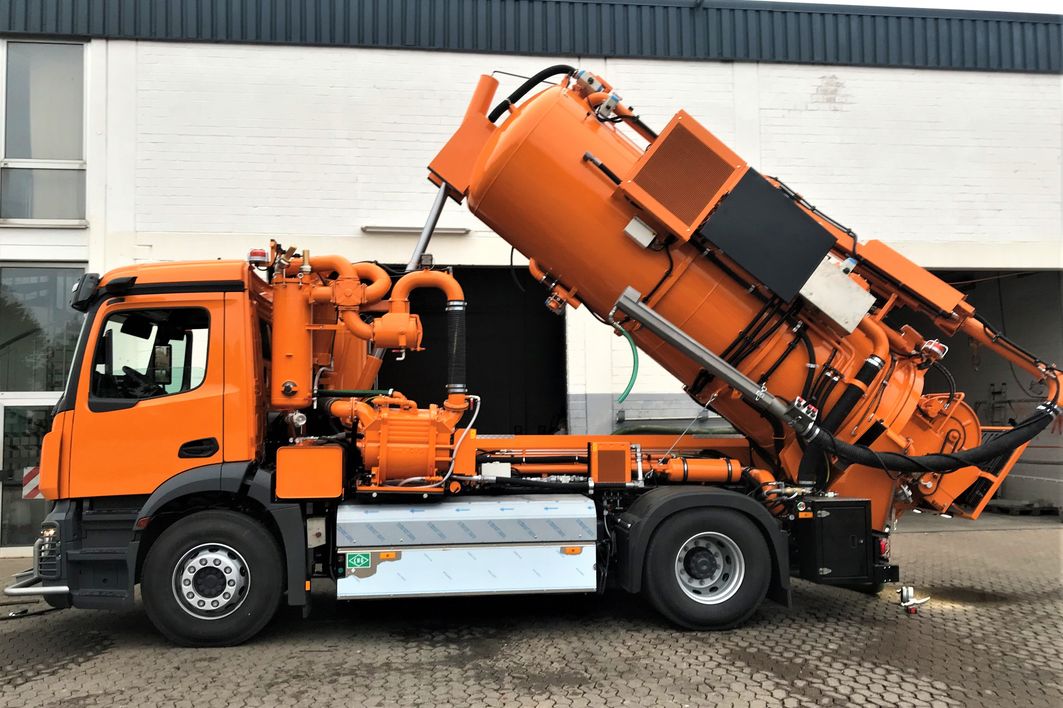 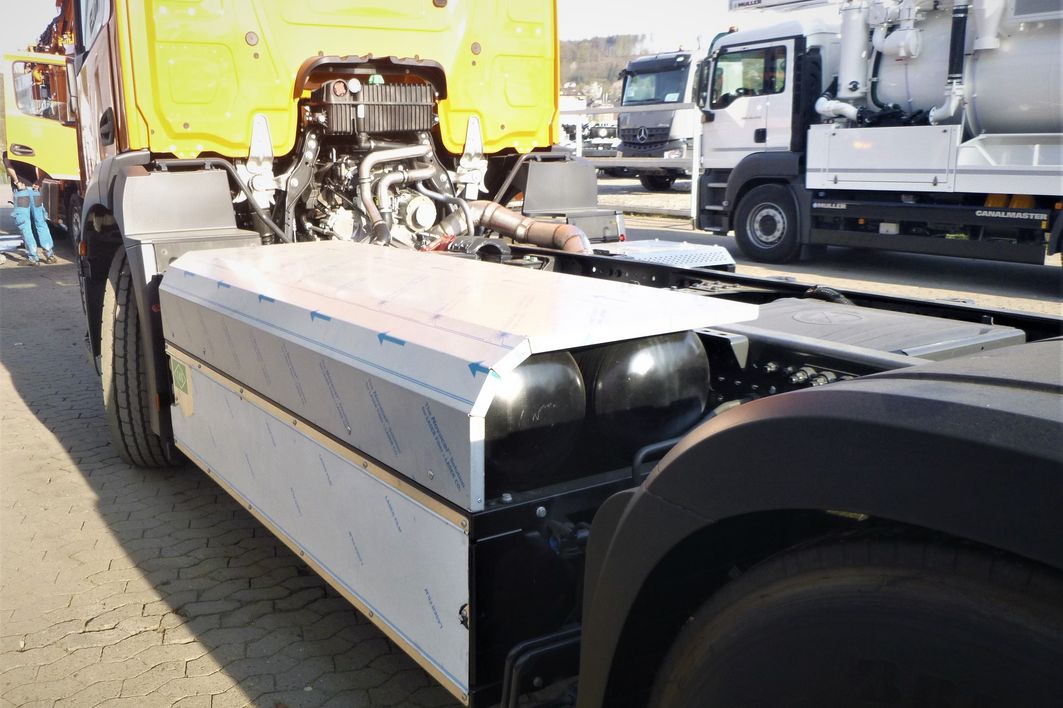